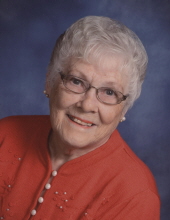 Dorothy Jean Paul, 89, of Mason City, died, on May 14, 2019 at the IOOF Home in Mason City. A funeral service will be held at Major Erickson Funeral Home, 111 N. Pennsylvania Ave, on Thursday, May 16, 2019 at 10:00 a.m., with Pastor Jeff Dahlin officiating. Interment will be at Elmwood – St. Joseph Cemetery. Visitation will be held one hour prior to service time.

Dorothy Jean Hoffman was born on February 14, 1930 in Renwick, Iowa, the daughter of Walter and Gertrude Barton Hoffman.

Dorothy grew up in rural Renwick and graduated from Renwick School and continued her education at the University of Northern Iowa. During this time she married Robert Paul of Eddyville, Iowa. Dorothy and her husband lived in Conrad, Iowa, for a short time where her husband was teaching. From there they moved to Gibson City, IL, where her husband was employed by the A.Y. McDonald as a heating engineer. They returned to Iowa living in Indianola, for a number of years before moving to Mason City where her husband operated Mason City Glass before retiring. Dorothy worked at the court house in Indianola and after moving to Mason City worked 15 years at the Girl Scout Office. She enjoyed the outdoors, travel, hand work, and most especially genealogy. Time she could spend with her children and grandchildren was very special.

She was preceded in death by her husband in 2001 and her parents.

Memorials may be directed to the Dorothy Paul Memorial or the North Iowa Genealogy Club.

To send flowers to the family in memory of Dorothy Jean Paul, please visit our flower store.