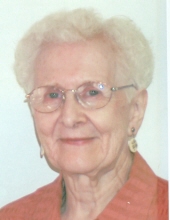 Dorothy was born October 29, 1926, in Burlington, WI, the daughter of Edward and Evelyn (Salisbury) Jahns. She graduated from Burlington High School in 1942, and continued her education at the University of Iowa in Iowa City, IA, earning her BA degree. In 1949, she moved to Mason City. Dottie was united in marriage to Myron L. Green on December 10, 1954, in Burlington. Dottie worked at the YWCA (youth director) for 7 years. She retired in 1956. Dottie loved art – especially working with clay. She enjoyed spending the summer months in Northern Idaho for 30+ years. She was a member of the First Congregational United Church of Christ and also taught art classes at the MacNider Art Museum.

Dottie is survived by her son: Timothy Green and wife Nancy of Columbus, OH; 3 grandchildren: Adam Green (Chelsea Grim) of Alexander, IA, Sean Green of Ames, IA and Ian Green of Ames; and sister-in-law: Joann Bartleson and husband George of Forest City, IA. She is also survived by several nieces and nephews.

She was preceded in death by her parents; her husband in 2015; a daughter in infancy: Ellen Green; and a brother: Robert Jahns.

To send flowers to the family in memory of Dorothy E. Green, please visit our flower store.