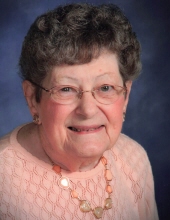 Dorothy Ann Platts was born March 25, 1923, in Omaha, Nebraska to parents Joe and Anna (Mader) Barta. She was the oldest of six children. She attended St. Mary’s Catholic School and graduated from South High School in Omaha Nebraska. She worked for Boys Town after graduating from high school and then the Federal Land Bank of Omaha. She met Silas W. Platts at the “Y “dance during World War II. They were married May 21, 1946, at St. Peter’s Catholic Church in Omaha, Nebraska and moved to Mason City, Iowa, her husband’s hometown. She worked as a bookkeeper at Sieg’s Auto Co. in Mason City until her first child was born, and then stayed home to raise her family of eight children.

Her greatest joy was caring for her family. She also enjoyed sewing especially for her grandchildren in their younger years, baking “Grandma Cookies”, taking care of her flowers, feeding her back yard “critters” and birds, and listening to polka music. She always made birthdays and holidays very special for her family especially Thanksgiving and Christmas. Dorothy lived in the home that she and Silas built when they were first married for 73 years. She then moved to Homestead Assisted Living at the age of 96.

The family of Dorothy would like to thank the staff at Homestead Mason City and Dr. Riesen for the special care that they gave Dorothy.

To send flowers to the family in memory of Dorothy Ann Platts, please visit our flower store.