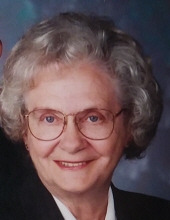 Visitation will be held one hour prior to the service time. Mask will be required.

Inurnment will be held in the Sunnyside Memory Gardens Cemetery in Charles City at a later date. Memorials may be directed to the MercyOne North Iowa Hospice.

Doris Marie Hicok was born on January 11, 1933, to parents Carl and Louise (Zimmermann) Janssen. Doris attended high school in Floyd. She was united in marriage to Lowell Hicok on November 26, 1950, at the St. John Lutheran Church in Charles City. The couple lived in Waterloo and they both worked at the National T grocery store. They then moved to Charles City and then to the Mason City area. For many years Doris worked as a cashier at HyVee until the 1970’s when she retired. She then took on the task of managing the books for her husband’s business.

Doris enjoyed going on camping and fishing trips going to Canada and the surrounding areas. In their later years the couple would winter in southern states taking their camper anywhere from Texas to Florida. Family was very important to her and she enjoyed visits and spending holidays with her grandchildren and great grandchildren. Playing cards with friends and doing puzzles were among other things that also brought her joy.

To send flowers to the family in memory of Doris M. Hicok, please visit our flower store.