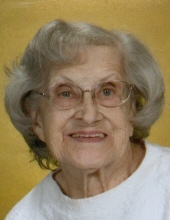 A scripture wake service will be held at 5 PM Sunday, September 30, 2018 at the Major Erickson Funeral Home. Interment will be held in the Elmwood-St. Joseph Cemetery.

Memorials may be directed to North Iowa Humane Society or Hospice of North Iowa.

Doris was born January 7, 1928 in Mason City, Iowa the daughter of Arnold and Louisa (Soukup) Slebiska. Doris has lived on the same block her entire life. She was united in marriage to George Pion on September 7, 1950 at the Holy Family Catholic Church in Mason City.

Doris was an accomplished seamstress who has mended, hemmed, sewn and tailored many items for many people over the years. She enjoyed working in the kitchen baking and cooking and sharing her feast of goodies with all.

Mrs. Pion was preceded in death by her parents and her husband.

To send flowers to the family in memory of Doris J. Pion, please visit our flower store.