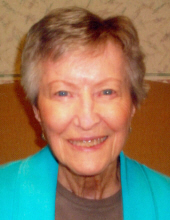 Visitation will be held at the church one hour prior to services. Arrangements are with Major Erickson Funeral Home and Crematory in Mason City.

Doris Elaine Mulert, the daughter of Jens and Emma (Madson) Mikkelson, was born April 28, 1923 at Britt. She attended rural school through the 8th grade and graduated from Crystal Lake High School and from Hamilton Business College in Mason City. Doris was employed as a secretary in the State Treasurer’s Office in Des Moines prior to her marriage to Vincent Mulert on January 11, 1944 in Shreveport, Louisiana, where Vincent was currently training to be sent abroad during World War II. Upon her husband’s medical discharge from combat service in 1945, the couple moved to Mason City. There she was employed as a legal secretary for local attorneys and later as the head office assistant in the Cerro Gordo County Extension Service until her retirement in 1981. She was a member of St. Joseph Catholic Church.

To send flowers to the family in memory of Doris E. Mulert, please visit our flower store.