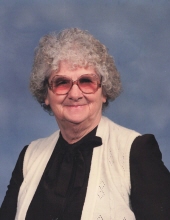 Dora Mae Weiland, 101, of Mason City, passed away on Tuesday, February 2, 2022 at the Good Shepherd Health Center in Mason City.

A memorial service will be held on Saturday, February 5, 2022, at 10:30 a.m., at Major Erickson Funeral Home, 111 North Pennsylvania, with Rev. Steve Johnson officiating.

Visitation will be held one hour prior to service time on Saturday.

Memorials may be directed to the family of Dora Weiland.

Dora was born on August 7, 1920 in Mitchell County, Iowa to parents William and Matilda (Diedrich) Lonergan. Dora worked many years at the Decker Meat Packing Plant and later at the Rockwell Nursing Home.

Dora was united into marriage to Bernard Weiland in Charles City on June 30, 1939. They moved to the Mason City area in 1943.

Dora was a longtime member of First Covenant Church in Mason City. She loved flower gardening, collecting dolls, knitting and crocheting. Dora was known for her excellent cooking; especially homemade noodles, cinnamon rolls, and fried chicken and gravy. Dora was loved by those who knew her and will be dearly missed by many.

To send flowers to the family in memory of Dora Mae Weiland, please visit our flower store.