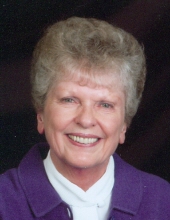 In lieu of flowers the family requests memorials be directed to one of the following, Trinity Lutheran Church, Hospice of North Iowa or North Iowa Area Community College.

Donna was born January 6, 1936, in Adrian, MN, the daughter of Albert and Alma (Gustafson) Lemke. She graduated from Fairmont High School in Fairmont, MN in 1953. She later earned her Nursing Degree in 1969 from North Iowa Area Community College.

Donna married Roger Holcomb on November 26, 1955, at East Chain Lutheran Church in East Chain, Minnesota. They moved to the Los Angeles, California area, while Roger was serving with the U.S Army. They moved to Plymouth, Iowa in 1957 and then to Mason City in 1960.

Donna started her nursing career at St. Joseph Mercy Hospital, she then went to work at Internal Medicine now the Mason City Clinic. She retired from Mason City Clinic after 24 years on December 18, 1996.

Donna was a member of Trinity Lutheran Church since 1960. She was a past member of Beta Sigma Phi Sorority. Donna’s greatest pleasure was being with her family and friends.

Donna was preceded in death by her husband and love of her life, Roger, by her parents, Albert and Alma Lemke, sister, Maurine Silveri and brother, Robert Lemke and sister-in-law, Mickey Lemke.

To send flowers to the family in memory of Donna Mae Holcomb, please visit our flower store.