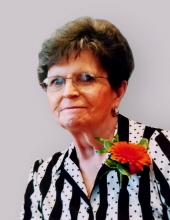 Donna Mae Rogers, 83, died Thursday, April 16 at Mercy Hospital in Mason City after a long battle with Alzheimer's Disease. She had been a resident of Good Shepherd Health Center for nearly 4 years.

Donna was born July 31,1936 in Mason City, the daughter of Kenneth and Louise Briggs. She graduated from Mason City High School in 1954, and then attended Mason City Junior College. Donna then moved to Fredericksburg, where she taught second grade for three years.

Donna married George Rogers on August 8,1958 at the Little Brown Church in Nashua. They lived in Fredericksburg until 1979, when they moved to New Hampton. After George retired, they moved to Mason City.

She was preceded in death by her husband, her parents, and her sister, Wava.

To send flowers to the family in memory of Donna M. Rogers, please visit our flower store.