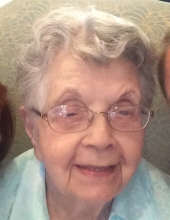 Donna Marie (Leaman) Henry, 98, passed away on October 25, 2022, at MercyOne North Iowa Medical Center in Mason City, Iowa. A funeral service will be held on Monday, October 31, 2022, at 10 a.m., at First Presbyterian Church, 100 South Pierce Avenue in Mason City with Pastor Beth Ehlers officiating. Visitation will be held from 3 p.m. to 5 p.m., on Sunday, October 30, 2022, at Major Erickson Funeral Home, 111 North Pennsylvania Avenue. Interment will be held at 2 PM in the Waterloo Cemetery, 1830 Kimball Ave, Waterloo. Memorials may be directed to the First Presbyterian Church in Mason City.

Donna was born to George and Viola (Patterson) Leaman on August 17, 1924, in Douglas Township, Bremer County, Iowa. She moved to Waterloo, Iowa with her parents at an early age, and spent most of her life in Waterloo.

On June 2, 1946, she married Thomas E. Henry in Waterloo, Iowa. Two children were born into this union: David James and John George.

They lived in Waterloo from 1946 until 2010, when they moved to Mason City, Iowa. After the move, Donna often said she was fortunate to live in a place where she got to know so many new friends.

To send flowers to the family in memory of Donna M. Henry, please visit our flower store.