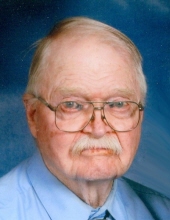 Donald V. Kalvig, 92, of Northwood, died Sunday, October 29, 2017 at the Linn Haven Rehab and Healthcare, New Hampton. Funeral services will be held 10:30 AM Friday, November 3, 2017 at Trinity Lutheran Church, 213 N. Pennsylvania Avenue with Pastor Kathy Graves officiating. Interment will be in Elmwood St. Joseph Cemetery. Military rites will be conducted by the Mason City Veterans Association. Visitation will be from 5:00 to 7:00 PM Thursday at Major Erickson Funeral Home, 111 N. Pennsylvania Avenue and continue one hour before services Friday at the church. Memorials may be directed to the Don Kalvig Memorial Fund.

Don was born June 18, 1925 in Mason City the son of Verne and Anna Marie (Thiel) Kalvig. He was the oldest of 10 children. Don attended school through the 8th grade but decided to quit school to help support his family. Don then enlisted in the US Army serving during WW II. He arrived in occupied Japan shortly after the atomic bomb was dropped. Following his honorable discharge, he returned home to marry Shirley A. Paul on August 18, 1947 in Kirksville, Missouri. They were married 70 years. Don loved farming and worked on a 40 acre farm owned by Willis Gaylord Clark Bagler and Arthur L. Rule. He would later go on to work as a Millwright retiring in 1990. Following his retirement, he worked as head custodian for the Northwood Kensett Schools for 7 years. Don was a life-long member of Trinity Lutheran Church. A few of Don’s interests included reading and working on old farm tractors and engines. From an early age, Don cared for his family and that caring for his family and others continued throughout his life.

To send flowers to the family in memory of Donald V. Kalvig, please visit our flower store.