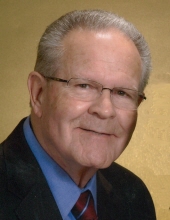 Donald P. Greenlee, 82, of Mason City, IA, died Sunday, October 8, 2017, at the Muse Norris Hospice Inpatient Unit. A memorial mass will be held at 10:30 AM on Friday, October 13, 2017, at Epiphany Parish St. Joseph’s Catholic Church, 302 5th Street SE, with Rev. Neil Manternach officiating. Visitation will be from 4:00 PM - 6:00 PM on Thursday, October 12, 2017, at Major Erickson Funeral Home, 111 N. Pennsylvania Avenue. Inurnment will take place at the Sacred Heart Cemetery in Osage, IA at a later date. Memorials may be directed to the University of Iowa Cancer Center or Disabled American Veterans.

Donald was born March 26, 1935, the son of Donald and Elizabeth (Kloberdanz) Greenlee. Don was raised and educated in Osage, Iowa; graduating from Osage High School in 1953. Served in the U.S. Air Force, as a Loadmaster on C-124 aircraft; flying to Europe, Greenland and other key locations in the Korean War.

Following his service, Don worked at Gildner’s Clothing in Osage, where he met Lois Gansen. They married in 1961. Don graduated from Drake University, earning a BS and MS in Education; teaching in Des Moines, Mason City and Osage, as well as serving as principal at Newman High School. He was a member of national and local education associations over his career.
Don was a fan of the Drake Bulldogs, Iowa Hawkeyes and Minnesota Twins. He also enjoyed gardening and spending time with his family. He was a member of the Knights of Columbus and the American Legion.

He is survived by his wife Lois, children Kathleen (Jim) Simon of Mahtomedi, MN and Steve (Terri) Greenlee of West Caldwell, NJ and grandchildren Madeline Simon and Emelie, Augustine and Donovan Greenlee, as well as a sister Yvonne (George) Latimer of Richardson, TX.

To send flowers to the family in memory of Donald P. Greenlee, please visit our flower store.