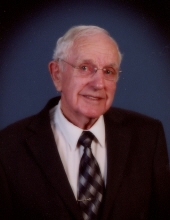 A private graveside service will be held at a later date in the Dumont Cemetery.

Memorials may be directed to the family of Donald Ubben.

Donald LeRoy Ubben was born April 24, 1931, at home in Butler County, south of Dumont to Claus and Annetté Ubben. He attended grade school at Hansell moving to Dumont as a freshman, he participated in baseball and basketball, graduating in 1948. He enlisted in the Navy in Febauary 1952 with an honorable discharge in 1956.

He married Lorraine Weiland Piper on May 18, 1957, at the Methodist Church in Albert Lea, MN. They were married 63 years, being blessed with three girls, Faith Ann, Joy Denise and Amber Sue.

He started farming in March 1957, in rural Ackley moving then to Aredale and Hampton. He was a grain and livestock farmer for 40 years especially enjoying his sheep, cattle and hogs, retiring and moving to their home in Mason City. Donald was a member of the New Hope United Methodist Church in Dumont, Vulcan Masonic Lodge in Bristow, Blue and White Pottery Club.

He enjoyed antiquing and the ”hunt” for that special piece of Blue and White Pottery.

To send flowers to the family in memory of Donald LeRoy Ubben, please visit our flower store.