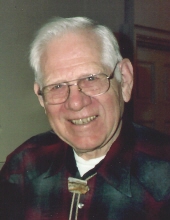 Donald Edwin Lee was born March 29, 1931, the third of seven children of Oliver and Ruth (Bollman) Lee of Dexter, MN. Don’s family were farmers, and he attended The School of Agriculture in St. Paul, MN, on a scholarship; it was there that he met the love of his life, Glennis Clipperton. Don farmed with his brother Nels until drafted into the army; while stationed in England during the Korean War as a PFC2 in the Army Corp of Engineers he married Glennis on April 19, 1955.

Don found his vocational passion early in life when his mother asked him to cut his brothers’ hair. He enjoyed it so much he bought himself electric clippers and started cutting his brothers’, father’s and even neighbors’ hair. While in ag school he regularly cut hair in the bathroom, and during the army he cut hair in the latrine and barracks. Don attended barber school at Waterloo Barber College in Waterloo, IA. He bought his shop at 930 E. State St in 1962. For fifty-four years, until Don’s retirement in 2016, Don Lee’s Barber Service was an iconic staple in Mason City.

While barbering was Don’s trade, farming and horticulture was still in his blood, and Mason City has reaped the rewards. Don was active in the community and served several years on the Chamber of Commerce Beautification Committee; Don was responsible for starting the city-wide flower bed project. He also served on the Mason City Park and Recreation Board from 1986-1994. He became known as Mr. East Park to many because of the amount of time and passion he poured into the park.

Don is preceded in death by Glennis, his wife of 56 years, his parents, and one sister, Lila Peterson.

Memorials may be directed to the Gardeners of North Iowa, for the continuation of his work in East Park; The River City Society for Historical Preservation; Hospice of North Iowa.

To send flowers to the family in memory of Donald Edwin Lee, please visit our flower store.