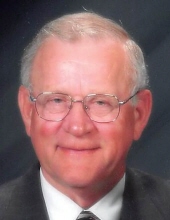 Inurnment will be held at a future date.

In place of flowers, memorials can be directed to family members.

Donations will be given to the Alzheimer's Association and Macular Degeneration Research in his honor.

Donald Eugene Muessigmann was born on October 29, 1941, at Coulter, Iowa, the son of Paul Matthew Muessigmann and Esther (Siems) Muessigmann. He moved a lot during his growing-up years and attended several schools in Iowa including Hampton and Geneva and various places in Missouri. Later he attended high school in Dumont, Iowa from 1956-1959 where he met his future wife, Carolyn Patterson. After graduating in 1959 he attended Minnesota Bible College in Minneapolis for one year. After Carolyn graduated in 1960, they were married in the Church of Christ in Bristow on July 1, 1960. The couple was blessed with four children: Donald Keith, Corinne Sue, Kimber Lee and Christopher Eugene. The family made their home in various locations in Iowa including Dumont, Sumner, New Hamton and later settled in Nora Springs and Mason City. Don worked in Real Estate in Nora Springs and the Mason City area. He later worked as a Right of Way agent for AT & T, Northern Border Pipeline and the Iowa Department of Transportation as a Right of Way supervisor. He retired in 2010.

After retiring he enjoyed God's creation, the outdoors by going camping, fishing and gardening. He \especially enjoyed the fishing trips to Minnesota with his four brothers and other family members. He enjoyed attending school concerts, sporting and other events the grandchildren and great-grandchildren took part in. Don always tried to find the positive in life even after developing an Alzheimer's type dementia and macular degeneration. His favorite advice to anyone he met was, "keep smiling".

He was preceded in death by his parents Paul and Esther Muessigmann, two brothers Richard and William and one sister, Pauline (Muessigmann) Lybarger.

To send flowers to the family in memory of Donald E. Muessigmann, please visit our flower store.