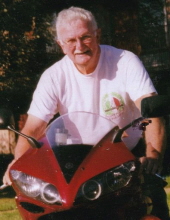 Donald D. Walters, 86, of Mason City, passed away on Thursday, March 4, 2021 at the Oakwood Care Center in Clear Lake, Iowa.

Services will be livestreamed to Major Erickson’s Facebook Page.

From a young age, Don was a hard worker, starting with his paper route. He worked at a couple different bakeries in Mason City during high school. After graduation he went to Florida but returned a short while later after he heard that Lehigh Cement Company was hiring. He worked at Lehigh as a turbine operator and later in the lab. He retired after 30 years at age 52.

Don met Lucy when he heard there was a new secretary at Trinity Lutheran Church, and he went there to “check her out.” She turned down his request for a date, but after many visits, she finally said yes. They were married on January 31, 1960 in Frost, MN. They raised their family in Mason City.

Don loved motorcycles. He bought his first one as a teen without the knowledge of his parents. In addition to his job at Lehigh, he was one of the owners of Bennett & Walters Cycle Shop. He went to the motorcycle races every year in Daytona, Florida, as well as local races and hill climbs. He rode his motorcycle to work every day, even in the dead of winter.

Don and Lucy loved to travel. They traveled to Germany, Jamaica, and Mexico. They took their kids camping almost every summer and after the kids left home, they enjoyed traveling to see them.

In his 70’s Don went to steam engine school and earned his Traction Engineer’s Certificate from Heritage Park of North Iowa. He loved putting on his striped overalls and cap and being a part of the steam engine events in the area.

An avid card player, Don was always up for a game. He loved teaching his kids and grandkids how to play and looked forward to some competitive games of 500, Hearts, 3-13, and more. He could also be easily talked into a game of dominoes, too. He will be remembered for his smile as he beat everyone in cards - just a hint of a sly grin.

He is preceded in death by his parents, Carl & Pearl Walters.

To send flowers to the family in memory of Donald D. Walters, please visit our flower store.