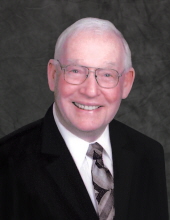 Visitation will take place one hour prior to the service.

Per church guidelines masks will be required for the service and visitation.

Memorials may be directed to the family of Donald Benjegerdes.

“Don,” as he was known to his family and friends, was born September 29, 1933, the eldest son of Walter H. and Florence I. Benjegerdes. He attended country school and graduated from Manly High School. In 1956, Don graduated from Iowa State College with a bachelor’s degree in agriculture.

While at Iowa State, he was active in Army ROTC. In June of 1954, while attending summer camp training, Don met his future wife, Clara Faye Kafer (Bobbie), at a YMCA mixer dance. It was love at first site. On May 19, 1956, they were married at the South Denver Baptist Church in Denver, Colorado. Don was commissioned as a second Lieutenant in the US Army and was stationed in San Francisco, CA where the couple spent the first years of their marriage. Don served in active duty from 1955 – 1957. In 1958, they moved back to Iowa to begin their farm life together and celebrated the birth of their first daughter, Becky Sue. Betsy Lou came along two years later.
Don enjoyed camping, fishing, storytelling, card playing, and morning coffee with the guys. He worked side by side with his brother Jim for over forty years as they farmed together.

Don loved to involve his wife and two daughters in farm work and was fond of saying, “I know you’re happy because you’re working.” After retirement he enjoyed woodworking and making things with and for his grandchildren in his shop. He was a devoted husband, a favorite uncle, a beloved grandfather, a cherished brother, and the best father two girls could ever have.

He was preceded in death by his father, Walter, his mother, Florence, and his niece, Valerie Benjegerdes. He will be truly missed by all those who knew him.

To send flowers to the family in memory of Donald C. Benjegerdes, please visit our flower store.