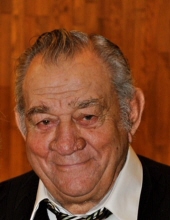 Donald A. Stangler, 87, of Mason City, died Tuesday, December 5, 2017 at the Muse Norris Hospice Inpatient Unit. Funeral services will be held 10:30 AM Monday December 11, 2017 at the First Covenant Church, Hwy 122 at South Ohio with Rev. Steve Johnson officiating. Interment will be in Memorial Park Cemetery. Visitation will be from 4:00 to 6:00 PM Sunday at Major Erickson Funeral Home, 111 N. Pennsylvania Avenue and continue at the church on Monday one hour prior to the service. In lieu of flowers, memorials may be directed to the Don Stangler Memorial Fund.

Don was born June 14, 1930 in Plymouth, Iowa the son of Joseph and Harriet (Paul) Stangler. Don married Patricia A. Trenkler May 27, 1950 in Mason City. Don worked in maintenance for Associated Milk Producers Inc. (AMPI) for 34 years. He retired in 1995. He also worked part-time for the city of Mason City in the Parks and Recreation Department for 50 years. There his jobs included umpiring, coaching, supervising softball, volleyball and swimming. He was proud to have mentored 3 grandchildren on the tasks of preparing and maintaining ball fields. Don was a charter member of the River City Softball Hall of Fame and was inducted with his son at the same time. Don was a graduate from the World Wide College of Auctioneering. Some other interests included bowling, fishing, hunting and training Labrador retriever dogs when he was young. A blue-grass music lover, he often traveled to Branson. He felt very blessed that his son and daughter raised their families in Mason City. He spent much time attending the games, concerts and recitals of his grandchildren. Don was a member of First Covenant Church.

Don was preceded in death by his parents; 2 brothers, Edward and Joseph; 5 sisters, Marguerite, Lorraine “Babe”, Dorothy, Elizabeth and Harriet.

To send flowers to the family in memory of Donald A. Stangler, please visit our flower store.