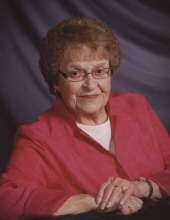 Memorials may be directed to the family of Dixie Harris.

Dixie was born to Walter and Lydia (Beisel) Muhlstein on August 12, 1935, in Mason City, Iowa. She grew up alongside three brothers Walter Jr. (Chunk), Don, and Rich, and sister Donna (Muhlstein) Meyer. In 1953, Dixie graduated from Mason City High School. Soon after, she met the love of her life, Charles (Chuck) E. Harris in Central Park on the Fourth of July weekend of 1953. They were united in marriage on June 20, 1954. Dixie and Chuck celebrated 62 years of marriage before he passed away in 2017. His absence was felt strongly in her final years.

Throughout her life, Dixie loved spending time with friends and family. She treasured the years she spent at home raising her children. In the mid-70s, she began working for Target, where she enjoyed her work and made new friends and memories. After her retirement, she used her free time to create special bonds with her three granddaughters and spend time with family and friends; this included traveling, gambling, or just visits over coffee. Additionally, Dixie was known and will be remembered for her impeccable handwriting and unending desire to ‘tidy up.’

Dixie was preceded in death by her husband Chuck, parents Walter and Lydia, brothers Walter Jr. and Don, sister Darlene, brother-in-law Ed, and sisters-in-law Mokey and Sharon. She is survived by children Charles (Mary) Harris of Mason City, Jay (Kristi Schroedl) Harris and Lori (Dean) Thole of Minneapolis, MN, granddaughters Jamie (Greg) Malek, Jillian (Scott Woodward) Harris of Mason City and Sara Trout of Minneapolis, MN, brother Rich (Trudy) Muhlstein and sister Donna Meyer. Dixie’s great-grandchildren include Ethan, Kellar, Sophie and Charlie Malek, and Cason and Rhett Trout. She was also loved by many cousins, nieces, nephews, step-grandkids, and friends, including goddaughter Brenda Bartz who showed a great deal of support through Dixie’s illness. Her step-grandchildren include Colin, Jessica, Brynlyn and Gavin Klang; Katy, Sean, Leo, and Max Duffy; and Kelly and Steven Blanchette.
Dixie’s absence will be felt by all who knew and loved her. Memorials can be directed to Dixie’s family.

To send flowers to the family in memory of Dixie Lavonne Harris , please visit our flower store.