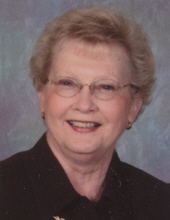 Dianna Mae Weber 83 of Pharr Texas formally of Mason city, died peacefully at her home on August 12th 2020. Services will be held at a later date. In leu of flowers, memorials can be directed to the American Cancer Society or leukemia lymphoma society.

Dianna Weber was born May 9,1937, in Cooperstown North Dakota to Clarence and Ethel (Michaelis) Paintner. She grew up on the family farm participating in FFA showing cattle and Duroc pigs. Dianna played clarinet in the band and was an avid reader. She graduated with honors from Cooperstown High School in 1955. She was joined in marriage to Elmo H. Arndt of Jessie North Dakota in 1954. They resided around the Cooperstown area. Dianna was employed by the Griggs County ASCS office for 10 years while raising her 3 children.
In 1964 the family moved to Iowa so Elmo could complete his graduate education. They moved to Mason city in 1966 where Elmo taught Physics and Dianna worked as secretary to the Dean at NIACC college until Elmo's death in 1977. Dianna was a lifetime learner and took many college courses. She later taught GED students through adult and continuing education. Dianna was a long-time member of Saint James Lutheran church in Mason City. She was an active member of the women's club, community kitchen and the renew center.
Dianna married George A. Weber of Mason City on September 2, 1978. They were married until George's death on August 4, 2007. After retiring from NIACC the couple enjoyed summers in Grand Marias, Minnesota with their campfire friends and winters in Pharr, Texas. After George’s death, Dianna spent most of her time in Texas. There she played the Clarinet in the orchestra, sold tickets to the weekly dance, played in a ladies card club, had various hobbies and enjoyed crossword puzzles.

To send flowers to the family in memory of Dianna Mae Weber, please visit our flower store.