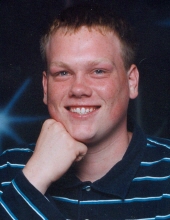 A gathering will take place one hour prior to the service. In lieu of flowers, memorials may be directed to the family of Derrick Winters.

Derrick was born July 31, 1987, in Mason City, the son of Kim Snook-Ellman and Willard Winters. He graduated from Manly High School in 2006. He worked numerous jobs with his favorite being Dominos. Derrick enjoyed camping, fishing and playing darts with his son Colton. He also enjoyed watching his son play baseball and was his number one fan. He was an avid Minnesota Vikings fan.
Derrick is survived by his son: Colton Winters and his mother Kim of Marble Rock, IA; his parents: Kim Snook-Ellman of Nora Springs, IA and Randy Ellman of Charles City, IA; step-dad: Duane Carlson of Kensett, IA; brothers: Chad Holding of Charles City and Justin (Hallie) Carlson of Mason City, Nathan Winters of Rudd, IA; sisters: Nicole Winters (Nate) of Rockford, IA and Ashley (Jarred) Carlson of Greene, IA, Katie (Tristan) Winters-Johns of Sumner, IA. He is also survived by many nieces and nephews.
He was preceded in death by his grandparents: Janice and David Snook; and his grandparents: Betty and Virgil Winters.

To send flowers to the family in memory of Derrick Scott Winters, please visit our flower store.