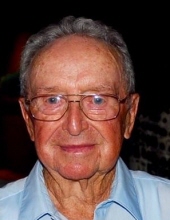 DeRay “Ray” Albert Lichty, 98, of Mason City, passed away January 14, 2018 at the Muse Norris Hospice Inpatient Unit. A celebration of Ray’s life will be Saturday, June 23, 2018 from 3 until 5 PM at the Mason City Country Club. Memorials may be directed to Hospice of North Iowa.

Ray was born March 4, 1919 in LuVerne, Iowa the son of Harry and Faye Lichty. He graduated from LuVerne High School. In 1939 Ray moved to Mason City to attend Hamilton’s School of Commerce. He met the love of his life, LaVaughn Pierce at the Surf Ballroom in Clear Lake, Iowa and they were married March 2, 1944.

During WWII Ray was a Chief Warrant Officer in the United States Navy, serving in the South Pacific. After an honorable discharge from the Navy, Ray worked at the Credit Bureau of Mason City for 34 years. His positions there included General Manager before he became owner in 1976. He sold the business and retired in 1986.

Ray was a member of the First United Methodist Church in Mason City and also a member of the evening Lions Club. He joined NIFPA in 1966, serving as president from 1988-2001, and remained an active member for 45 years.

To send flowers to the family in memory of DeRay A. Lichty, please visit our flower store.