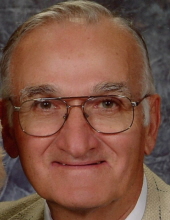 Dennis Laird Bryant was born on June 25, 1932 to Ralph and Marjory (Bouck) Bryant in rural Mason City, Iowa. He was the oldest of four children. Dennis attended and graduated from Mason City High School in 1951. After graduation, Dennis attended Iowa State for awhile, and he was then drafted to the Army. Dennis was sent to Germany where he drove staff car for generals and higher ups. Once he returned from the Service, he then attended Mason City Junior College and graduated in 1957.
On June 9, 1957 he was united into marriage to Dolly Rasmuson at the Britt Lutheran Church. To this union, Dennis and Dolly were blessed with three children.
For many years, Dennis worked for 18 years as a Plant Manager for US Agri Chemicals. He then returned to Mason City to the family farm. He went to work for Romey Seed Company as a district seed manager. He continued to farm and help his son. He especially enjoyed planting and driving the combine. There was not anything that he couldn’t fix or build.
Dennis made many clocks and marble towers. He designed a wooden locomotive for the 457 group. Dennis enjoyed spending time outdoors whether fishing in the summertime, or plowing snow with his John Deere snowblower in the winter.
Dennis was really interested in his family history and liked finding interesting facts of his family past.
Dennis was very active in the Lion’s Club and the board of the Kinney Pioneer Museum, serving as president in the last year.
Dennis is survived by his wife, Dolly; two sons, David Laird Bryant and Dale Randall Bryant; three grandchildren, Justin Barkema of Belmond, Iowa, Kristin Drilen of Steinkjer, Norway, Michele Drilen of Bjun, Norway; one great granddaughter, Alessa, of Steinkjer, Norway; niece Julie Bryant of Monticello, Florida; four nephews, James Bryant of Crawfordville, Florida, Paul Bryant of Appleton, Wisconsin, Julius Bryant of Charles City, Iowa, and Seth Harnack of St. Joseph, Missouri, and special friends, Jennie, Mike, and Coltn O’Donnell.
Dennis is preceded in death by his parents, Ralph Bryant and Marjory (Bouck); brother, Jerry Bryant; grandmother Nancy (Laird) Bouck; aunt and uncle, Helen (Bryant) and Jule Thompson; sister, Jean (Bryant) Beckmier; daughter Deloris (Bryant) Drilen; and a niece Teresa Bryant.

The family requests that you please dress casual for the service.

To send flowers to the family in memory of Dennis L. Bryant, please visit our flower store.