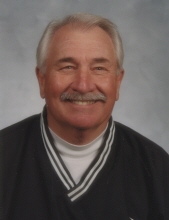 A private family funeral service will be held.

Memorials may be directed to the family of Dennis Scott.

Dennis Gene Scott was born on April 27, 1937, in Alexander, Iowa, to parents Donald and Berniece (Bohlen) Scott. Dennis graduated from Alexander High School in 1955, he then went to Ellworth Community College for a year and a half. In 1957 he joined the United States Marine Corps and was Honorably Discharged in 1960. The same year Dennis met his soon to be wife at the Surf Ballroom marrying Judith Hunt on March 29, 1961, at the First United Methodist Church. Dennis worked a variety of jobs ranging from Coca Cola, Gamble Robinson, Snow Boy as well as starting his own Dump Truck Company with long time friend Joel Chase, together the two ran Scott-Chase Trucking while also being a member of the Mason City Fire Department which he did for 29 years obtaining the rank of Captain. Upon retiring from the Fire Department Dennis drove school buses for the Mason City School District for 10 years.

Dennis will be remembered as a working man who loved his family and watching his grandchildren play sports. He was an avid golfer playing at the Pioneer Town and Country Golf Club in Manly any chance he could.

He was preceded in death by his wife: Judith Scott; parents: Donald and Berniece Scott; sister: Cheryl Barkema

To send flowers to the family in memory of Dennis Gene Scott, please visit our flower store.