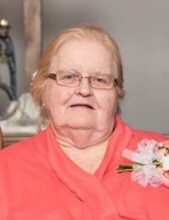 Memorials may be directed to First United Methodist Church.

Delores Dee Lathrop was born July 2, 1935, in Mason City to Roy and Geraldine (Tantow) Ward, the second of four children. Growing up, Delores participated in band and graduated from Mason City High School.

Delores obtained a nursing degree from Coe College. She married Allen Lathrop February 19, 1956, in Mason City. Delores and Allen moved to Waterloo, where she worked for a short time, and then stayed at home to care for her four children. In 1975, Delores became heavily involved in farming; she moved back to Mason City and became the Co-Manager of Lathrop Farms, where she worked until her retirement.

Throughout her life, Delores was involved in the American Legion Auxiliary, her church, Women’s Coalition, and the Waterloo Fire Department Auxiliary. Delores was passionate about her farm's pond; she even had a researcher from Iowa State University conduct and publish research on it. Delores loved planning family gatherings to bring everyone together. She cherished moments spent with her husband, children, and later in life, her grandchildren and great grandchildren.

Delores is preceded in death by her parents, and her siblings, LeRoy Ward, Evelyn Holmes, and Dale Ward.

To send flowers to the family in memory of Delores Dee Lathrop, please visit our flower store.