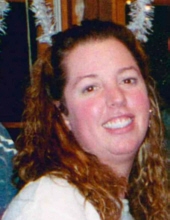 A private graveside service will be held in Elmwood – St. Joseph Cemetery at a later date.

Memorials may be directed to the family of Dawn Kantola.

Dawn M. Kantola was born on September 10, 1970, in Milwaukee, WI to parents Wayne and Rosanne (Crotteau) Arp. Dawn grew up in Mason City and graduated from Mason City High School. She went on to graduate from NIACC as well as Iowa State University. After graduating from college Dawn moved to Denver, CO working as a Medical Transcriptionist. She moved too Ankeny in July of 2016.

Dawn loved raising her girls Amber and Sara, traveling, being together with family and friends and a great love for animals. Dawn was a very upbeat person who always had a positive attitude even when things were tough. She will always be in our hearts as she gave her family great memories. She is now walking in heaven with those that have gone before her. She will be dearly missed.

She was preceded in death by her mother, Rosanne.

To send flowers to the family in memory of Dawn M. Kantola, please visit our flower store.