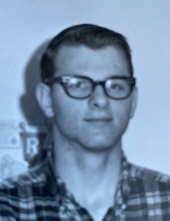 No funeral services are scheduled at this time.

Memorials may be directed to the family of David Withers.

David was born in Mason City on July 26, 1947 to Lawrence and Georgetta Withers. He graduated from Mason City High School in 1965. He was inducted into the Navy on June 14, 1967. He was trained as an operating room tech at the naval hospital in Oakland, CA. After his military service he attended the University of Northern Iowa, where he graduated with a BA degree in Sociology on August 6, 1971. He then spent time in the Peace Corps. He retired from Target after 14 years of employment. He died in hospice care.

David was preceded in death by his parents, and sister, Judy Withers Daniels.

To send flowers to the family in memory of David "Butch" Withers, please visit our flower store.