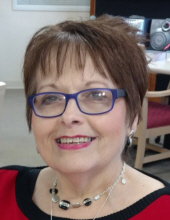 Darla Rae Karstens, 65, of Clear Lake, went to be with her Savior on Thursday, March 14, 2019 at MercyOne North Iowa Hospice in Mason City, surrounded by her loving family.

A memorial service will be held 11 A.M., Saturday, March 16, 2019 at Zion Lutheran Church in Clear Lake. Services will be held at a later date in her hometown.

Memorials may be made in Darla’s name to MercyOne North Iowa Hospice, 232 2nd St. S.E., Mason City, IA 50401, where she spent her final days in peace.

Darla was born the youngest of six children in Sac City, IA on February 6, 1954 to Raymond and Mamie Karstens. Darla was a strong Lutheran her entire life and had a personal connection with God. She enjoyed talking about her faith and debating theology with others. She was baptized at St. Paul’s Lutheran Church in Sac City, IA on February 28, 1954 and confirmed in on April 7, 1968.
Darla was very independent and hard-working. Growing up, she worked for her Aunt LaVonne and Uncle Vernice at the drive through in Lake View. She also worked at a restaurant in Sac City. During college, she worked as a dispatcher at the Sac County Sheriff’s office. Education was very important to Darla. She graduated from Crestland High School in Early, IA from 1972 and attended Iowa Central College and obtained her nursing license in 1976. She worked as a nurse’s aide and nurse at various nursing homes and hospitals in Iowa. Darla was proud of her work at the University of Iowa Hospitals. She moved to Missouri in 1977, where she lived until she moved to Rochester, MN. She ended her nursing career as the director of a home health agency in Milan, MO. Darla loved to tell many funny stories about her work life that amused her family. In her later years, she worked at a preschool in Rochester, MN. She loved children, as was evident by the close relationships she had with her many nieces and nephews. She made sure to know the interests of each of her family members and always picked out the perfect treats and gifts. Darla moved to Clear Lake, Iowa recently to be with family. She enjoyed her new friendships she made here. Her family is grateful for the care and concern shown to Darla by her friends at Lake Plaza Apartments.

Darla was preceded in death by her grandparents; her parents, her brother, Duane Karstens; nephew, Lance Karstens; and her great-nephew, Eli Karstens.

Go rest high on that mountain, Darla. Your work on earth is done. Online condolences may be made at www.majorericksonfuneralhome.com.

To send flowers to the family in memory of Darla Rae Karstens, please visit our flower store.