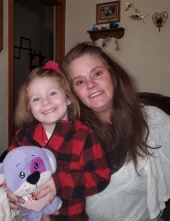 Visitation will take place one hour prior to the service.

DaleAnn was born in Cedar Rapids, Iowa July 14, 1963, to Dale Leslie Northrup and Anna May Shunkwiler. Growing up the family lived in the Cedar Rapids area and Redwood City, California until DaleAnn was about 7 years old when the family moved to the Mason City area. She went to School at McKinley Elementary, Monroe Middle School, followed by Mason City High School Graduating in 1982. After graduating she continued her education at Hamilton Business College graduating with an associates degree in paralegal services.

DaleAnn was united in marriage to Russell Scott Dusheck June 19, 1993, at St James Lutheran Church in Mason City, Iowa. Their son Blake Robert was born Augst 1st 1990 in Omaha, Nebraska. In life DaleAnn loved caring for others, Especially her family and close friends as well as her dogs Citori forever DaleAnn's best dog friend (who she was inseperable from) as well as her two other dogs July and Mayce who meant the world to her.

She enjoyed Camping with her family in Decorah, Iowa at Pulpit Rock Campground, Rummage Sales, Thrift Stores and buying anything and everything for her granddaughter Abigail Rose Fish. She also liked spending as much time with and around Abigail. Decorating her room, picking out outfits for her and putting her in Puma shoes she was so proud of. Going to concerts with her son and taking pictures and videos of every moment possible to keep a memory of every little thing she found important. Cooking for her family members, drawing and coloring. She was an avid Packers fan and tried to watch every game she could.
She worked in the food service industry for many years and a majority of her time working was spent at McDonalds South in Mason City. She spent many years running a cleaning service and watching over her family and friends children.

DaleAnn was preceded in death by her parents Dale in 2003, Anna May in 2013. One brother Brian Dale Northrup in 1996 as well as her grandma Elsie Shunkwiler in 2013.

Inurnment will be held in Elmwood – St. Joseph Cemetery.

Memorials may be directed to the family of DaleAnn Dusheck.

To send flowers to the family in memory of DaleAnn Marie Dusheck, please visit our flower store.