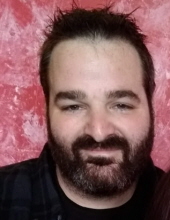 In lieu of flower memorials may be directed to a college fund established for Cory’s children.

Cory Gene Ott was born in Mason City on July 4th 1985 to parents David and Beth (Reed) Ott, the youngest of four children.

After a very long friendship Cory was United in marriage to his best friend Trisha Stevens in Mason City.

Cory had a love of the outdoors as well as a passion for animals. He enjoyed snowmobiling in the winter months and riding motorcycles during the summer.

Most recently he enjoyed, and was very proud of his patio garden which contained tomatoes and peppers.

But most importantly of all Cory enjoy being a loving father and sharing his love for the the Lord with his family. His children were his pride and joy, and he loved spending all the time he could with them.

Cory will be dearly missed by all.

He is survived by his wife: Trisha; children: Jayla 8, Malia 6, and Cade 4; parents: David and Beth Ott; in-laws: David and Valentina Stevens; siblings: Amy (Joshua) Anderson, Nathan (Nicole) Ott, and Kevin (Candace) Ott; as well as many nieces and nephews.

He was preceded in death by his grandparents and aunt Wilma Traeger.

To send flowers to the family in memory of Cory Gene Ott, please visit our flower store.