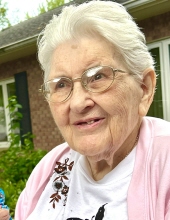 Born December 9, 1929 in Ruthven, IA the daughter of Oscar and Nora (Bakke) Johnson. Moved to Mason City in the 7th grade, graduated from Mason City high School 1949. She married W. Lyle Butler in June 1953 and to this union three children were born. Alan, Diane, Arlyn. They first lived in rural Kensett Iowa on the Butler family farm and moved to Mason City in 1960, until recently moving to Oakwood Care Center in Clear Lake.

Corrine was a long-time employee of the Mason City schools, known as the “cinnamon roll lady” of Mason City High School and John Adams. She retired from John Adams where she did custodial work. Her wedding and birthday cakes were works of art and she had a never-ending supply of cookies. She was a crafty woman of complex quilt patterns.

She loved to dance and frequented the Surf Ballroom as a young adult. Her and Lyle joined a square-dancing group called the Grapevine Twist and danced their way across the United States. They loved to travel including trips to Alaska, Hawaii and Europe. They camped in nearly every State. They took their children and grandchildren camping. Corrine and Lyle wintered in Texas for many years with friends from the Midwest. She was a social butterfly. At one time she was in a bowling league and a member of several other clubs. She was a Cub Scout leader. She loved to play games, especially dice and cards. She met up with her friends at least once a week for breakfast and coffee. She was loyal to her church. She had been a member of St. Paul Lutheran Church since childhood, was married in the church and stayed for coffee afterwards to socialize with her church friends. She was a witty jokester who loved a good laugh. She brought humor and laughter with her everywhere even until her final days at Oakwood Care Center, where she would have the nurses cracking up. Corrine found joy in everything she did. She was a lively spirit, and her spirit lives on with all of us who loved her and will honor her memory. When you see a cardinal you can think of Corrine, they were her favorite bird.

She is preceded in death by Lyle, her husband of 68 years, her grandson Beckett, sister Arlene Cunningham, brothers Gene, Robert, and Virgil Johnson, and her parents.

To send flowers to the family in memory of Corrine M. Butler, please visit our flower store.