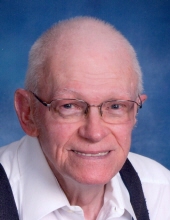 Visitation will be held from 2 to 4 P.M., Sunday at Major Erickson Funeral Home, 111 N. Pennsylvania Ave., Mason City and will resume one hour prior to services at the church.

Memorials may be directed to the Clifford Schuldt Memorial Fund.

Clifford Lawrence Schuldt, the son of Fred and Rose (Marienau) Schuldt, was born May 28, 1932 at Brunsville, Iowa. He graduated from Central High School in Sioux City in 1950. On March 13, 1961 he married Thelma George in Laverne, MN. They lived in Waterloo until 1977, when they moved to Mason City. Cliff worked as an asphalt technician for 29 years for the Iowa Department of Transportation until his retirement in 1994. Following his retirement, they moved to Fond du Lac, WI. In 1996 they returned to Mason City. Cliff enjoyed music and playing his guitar. Serving the Lord was his focus in life.

He was a member of Grace Evangelical Free Church and Gideons.

Cliff is survived by his daughter, Rhonda Schuldt of Rochester, MN; daughter Shelley Richardson of Tucson, AZ; and son Steve Schuldt of Wasilla, AK, plus many foster children including Betty Sadler and Tim, Mark and David Walker; seven grandchildren; his brother, Richard (Carol) Schuldt; and other family and friends.

He was preceded in death by his parents; wife, Thelma in 2008; son, Billy Joe Schuldt; sister, Lois Junck and brother, Orville Schuldt.

To send flowers to the family in memory of Clifford L. Schuldt, please visit our flower store.