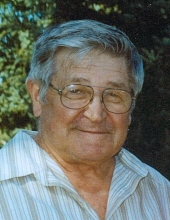 Funeral services will be held at 10:00 AM on Friday, March 16, 2018, at Major Erickson Funeral Home, 111 N. Pennsylvania Avenue, with Derek Facculyn-Gous of the Church of Christ officiating.

Memorials may be directed to the family of Clarence Kral.

Clarence was born May 26, 1939, in Forest City, IA, the son of James and Mary (Ptacek) Kral. He graduated from Sacred Heart Catholic School in Rockwell, IA in 1957. On October 8, 1960, Clarence was united in marriage to Diana L. Paulsen at the Sacred Heart Church in Rockwell. Over the years, he worked for Armour Meat Packing Plant, Wayne Feeds and Curries until his retirement in 2004. Clarence enjoyed spending time with his family – especially his grandchildren. He also enjoyed hunting, fishing, gardening, spending time outdoors, small livestock, riding in the tractor and helping his son on the acreage. He was a member of the Church of Christ.

He was preceded in death by his parents; son: Kirk Kral; and brother: Maynard Kral.

To send flowers to the family in memory of Clarence J. Kral, please visit our flower store.