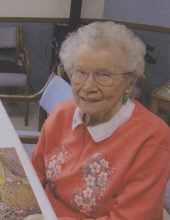 Clara E. Peterson, 102, of Mason City, died peacefully on Monday, October 21, 2019, at the Good Shepherd Health Center. Her devoted granddaughter, Lori, was by her side.

Visitation will take place one hour prior to the funeral service.

Memorials may be directed to the family of Clara Peterson.

Clara Eleanor Peterson was born in Latimer on July 24, 1917, to parents Thor and Alma (Johnson) Kofoed. Clara was raised in Thornton later moving to Mason City where she worked at Modern Grocery and later Standard Paint and Glass. She was a longtime member of Trinity Lutheran Church, where she taught Sunday School for over 40 years.

She was preceded in death by her parents; husband: Warren Peterson; daughter: Dixie Bast.

To send flowers to the family in memory of Clara E. Peterson, please visit our flower store.