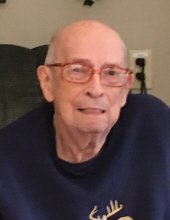 Claire L. Ellingson, 88, of Mason City, was reunited with his wife on Tuesday, November 12, 2019, at Good Shepherd Health Center in Mason City.

A celebration of his life will take place on Friday, November 15, 2019 at 10:30 a.m. at Major Erickson Funeral Home, 111 North Pennsylvania. Interment will be held at Elmwood – St. Joseph Cemetery. A visitation will be held one hour prior to service time on Friday.

Claire was born in Amboy, MN on January 16, 1931, to Clarence and Myrtle (Miller) Ellingson, and grew up in St. James, MN. He moved to Mason City, IA in 1945 with his father where he attended school at Mason City High School graduating in 1949.

He enlisted in the Army during the Korean Conflict where he was a Communication’s Specialist Stationed in Hokkaido, Japan.

After serving his country he returned home and married his beloved Marilyn (Tosel) on July 25, 1956. He went to work at the Historic Park-Inn Hotel which his father owned at the time. He was a manager of day to day operations, chef, and tended bar in the evenings. The business was sold in 1972 and Claire went to work for Winnebago Industries for a short time and then Libby Owens Ford Glass Company where he retired in the early nineties when the business closed.

Claire will always be remembered for his love of travel, gardening and especially his love of the University of Minnesota Golden Gophers. He enjoyed any Gophers sports, but football had a special place in his heart. He cheered them to victory on many occasions.

Claire is preceded in death by his loving wife Marilyn (1995); son-in-law Kenneth Block; and his parents, Myrtle Lamb and Clarence Ellingson.

To send flowers to the family in memory of Claire L. Ellingson, please visit our flower store.