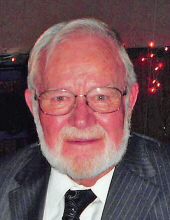 Per his wishes, his body was donated to Mayo Clinic Department of Anatomy in Rochester, MN. Private memorial services will be held at a later date.

In lieu of flowers, memorials may be directed to the Salvation Army, Hawkeye Harvest Food Bank or MercyOne North Iowa Hospice.

Online condolences may be left for the family at www.majorericksonfuneralhome.com

Charles was born December 30, 1925 in Davenport, Iowa to Clay E. and Betty (Brown) Murray. He was a devoted husband of Indus (Wiley) Murray for 67 years before she died in December of 2015, devoted father to six children, cherished grandfather to ten grandchildren and eleven great grandchildren.

Charles grew up on a farm in Davenport, Iowa. He attended country school and graduated from Davenport High School in 1943. He enlisted in the U.S. Army during WW II, serving with the 97th Infantry in Germany, France, Czechoslovakia and later in occupied Japan. After the war, he attended St. Ambrose College. He married the love of his life, Indus, on June 13, 1948. Charles had a long career with Sieg Company in Davenport, Sterling, IL and serving as General Manager in Mason City. He was a longtime member of the Mason City School Board where he served as president and Rotary International.

To send flowers to the family in memory of Charles E. Murray, please visit our flower store.