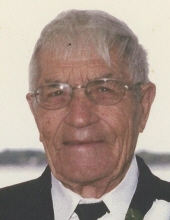 Services will be livestreamed to Major Erickson’s YouTube Page.

Interment will be at Elmwood-St. Joseph Cemetery.

Cecil L. Weaver was born in Lakota, Iowa on June 17, 1927 to parents Herman and Katie (Nelson) Weaver. He grew up in the Thompson, Iowa area.

Cecil helped his dad on the farm and other area farmers. He moved to Mason City, Iowa where he started working at Lehigh Cement Plant, driving Tri Haulers and doing dynamite work. He retired from Lehigh after 30 years. He was always helping others working on their tractors and cars. Cecil married Emma Schutter, and later married Paula Krumm. Cecil had a love for horses and dogs having many over the years. Cecil was known for telling stories to the kids which they all enjoyed.

He enjoyed riding his Harley when he was younger. Also going to the races and helping the boys with their demo cars. He enjoyed playing pool. If there was Country and Western music playing, Cecil was out on the dance floor dancing with the ladies. He always enjoyed fishing and camping with special friends. He always liked to travel especially to the Valley of Texas and Branson, Missouri. Cecil enjoyed visiting with people whether he knew them or not, making a lot of friends over the years. It seemed that no matter where we went someone knew Cecil.

To send flowers to the family in memory of Cecil L. Weaver, please visit our flower store.