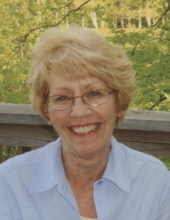 Visitation will be held from 4 to 6 pm on Thursday, December 5, 2019, at Major Erickson Funeral Home, 111 N Pennsylvania Ave.

Memorials may be directed to the family of Carolyn King.

Burial will be held at a later date.

Carolyn A. King was born on September 5, 1945, in Portland, Iowa to parents Clayton and Tilla (Ericksen) Quam. Carolyn attended Mason City high School and graduated in 1963. On February 23, 1964 she was united in marriage to Raleigh King at Trinity Lutheran Church. Between this union the couple had two children. She and Raleigh made Mason City their home, where she worked at Bergos Clothing Store, J.C. Penny’s, McGladrey & Pullen and MercyOne Medical Center as a housekeeper, a job she truly enjoyed.

Carolyn had many joys in life, she was an avid Minnesota Vikings and Iowa Hawkeyes fan, she enjoyed bowling, fishing, spending time at their cabin in St. Ansgar, playing cards, going to the casino, she also liked buying scratcher lotto tickets, she was playing Lucky’s 7’s one time and hit the grand prize of $7,777.00. She went on many fishing trips with the Lunker Fishing Club in Canada. She was a very family-oriented person who loved cooking for the holidays, dancing and spending quality time with her family and friends.

To send flowers to the family in memory of Carolyn A King, please visit our flower store.