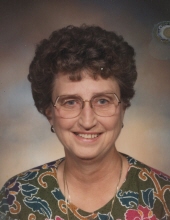 Carol was employed by Northwestern Bell for 20 years and later worked for the Mason City School District as an assistant storeroom clerk. She retired in 2000 from the Mason City Schools. Carol was very talented, she created beautiful woodworking pieces and paintings. She also enjoyed crocheting when she wasn’t baking treats and goodies for everyone. Carol took up coloring in her later years. Her and Duane were very active in Wesley United Methodist Church where she was a circle member for many years. But her greatest joys were watching her children, grandchildren and great-grandchildren grow. She was also a member of the River City Gems Red Hat Society.

To send flowers to the family in memory of Carol E. King, please visit our flower store.