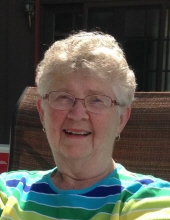 Carol Ann Jass, 82, of Ankeny, IA and formerly of Mason City, IA, passed away Sunday, July 3, 2022, at the MercyOne Hospice House, Johnston, IA. Memorial services will be held at 11 AM Saturday, July 9, 2022, at the Wesley United Methodist Church with the Rev. Brent Hamilton officiating. Visitation will be held from 4 until 8 PM Friday at Major Erickson Funeral Home, 111 North Pennsylvania Ave., Mason City, IA. In lieu of flowers, donations may be made to MercyOne Hospice, 5820 Winwood Drive, Johnston, IA 50131 or to her church, Wesley United Methodist Church, 1405 South Pennsylvania Ave., Mason City, IA 50401 for building improvements, where Carol and Dick were the caretakers for 17 years in retirement.

Carol was truly an amazing woman. Family, friends and faith were most important to her. She was selfless, always helping others, one who loved unconditionally. Her words were wise, kindness was her rule. She was the epitome of grace, love, joy, and compassion. She opened her door and welcomed all warmly. She loved making pancakes for her grandkids, having coffee with friends, collecting angels, watching ice skating, and soap operas. She touched us all and will be deeply missed.

She was preceded in death by her parents, John and Helen Humphrey; a sister, Reta Schaefer; and brothers-in-law, Robert Dodd, Gerald Quintus, Eugene Schaefer and Gary Gilbert.

To send flowers to the family in memory of Carol A. Jass, please visit our flower store.