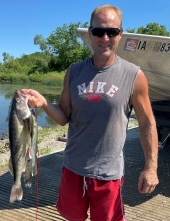 Carleton Watters, 44, of Swaledale, died on September 27, 2021, at the University of Iowa Hospitals.

Following the visitation, the family invites those with memories of Carl to stay for a time of sharing.

Memorials may be directed to the family of Carl Watters.

Carleton John Watters (CJ) was born on April 12, 1977, in Kingman, Arizona to parents Daniel and Bernadette (Belmont) Watters. Carl spent most of his childhood in Arizona until his family moved back to the Midwest in 1989 when he was in the seventh grade. Carl graduated from Rockwell-Swaledale High School in 1995. He enjoyed playing sports especially football were he was a two time First Team All State selection. Following high school he continued his education at NIACC where he received his Associates Degree. Carl went on to work for United Parcel Service and did so for 14 years. During his 14 year career with UPS, he was mentored by Frank Hanig and Tim Ditsworth in the art of construction, motivating him to start his own construction company Watters Construction. Carl was a perfectionist and took great pride in his work.

Carl had three daughters who meant the world to him. He was a man of many talents with many different hobbies. A few of those being hunting, fishing, and camping. Carl throughly enjoyed spending time with his family and friends doing the things he loved. Carl always had a couple of sayings “work hard play hard” and “I’m fishing for men” meaning he was looking to spread the gospel to whomever he met. Carl’s faith and relationship with Jesus was the most important thing in his life and he was bold in sharing it. He was a friend to everyone whether he knew you or not. He was as humble as they come and was known as a gentle giant who loved to be around people. Carl’s presence will be forever missed.

To send flowers to the family in memory of Carleton John Watters, please visit our flower store.