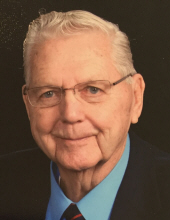 Funeral services will be held 10:30 A.M., Wednesday, April 3, 2019 at First Baptist Church in Mason City with Rev. Ron Stein officiating. Burial will be at Elmwood – St. Joseph Cemetery in Mason City with military rites by the Mason City Veterans Association.

Visitation will be held one hour prior to services at the church on Wednesday.

Clarence Burr Heitland, the son of G. Bob and Velma (Smith) Heitland, was born September 20, 1931 in Buffalo Center. He graduated from Buffalo Center High School and continued his education at Coe College in Cedar Rapids. On May 9, 1952 he married Dorothy Mathahs at the Congregational Church in Buffalo Center. Burr served his country during the Korean War in the U.S. Army. Following his honorable discharge, he returned to Iowa and attended Hamilton Business College in Mason City. Burr and Dorothy lived in Mason City where Burr was employed at Sedars Motor Company as general manager until his retirement in 1992. He enjoyed golfing, traveling, attending Bible study and cars, especially his 1965 Pontiac GTO. Burr was very proud of his children and grandchildren supporting them in their many activities.

He was a longtime member of First Baptist Church in Mason City where he served on many boards and committees. He also belonged to the North Iowa Vintage Auto Club for many years.

He was preceded in death by his parents; wife, Dorothy; and daughter, Debra Heitland.

To send flowers to the family in memory of C. Burr Heitland, please visit our flower store.