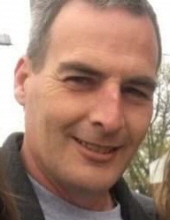 A celebration of life will be held at the North Iowa Events Center Kinney building on Tuesday, October 5, 2021 from 4pm-8pm. There will be no formal services, and the family requests casual dress. A small luncheon style meal will be provided as well as space to sit and reminisce amongst friends and family. Masks are optional, but not required. In lieu of flowers, Memorials may be directed to the family.

Bryan was born November 10th, 1972 in Osage, Iowa, to Gayle (Grauerholz) and Craig Brandau. He graduated from Rudd-Rockford-Marble Rock school in 1991, and Lincoln Tech in Des Moines, with a degree in Automotive Service and management in 1992.

Bryan was well known for being “the best mechanic around” and spent the majority of his adult life working as an auto mechanic. At the time of his passing, he was the store manager of O’Reilly Auto Parts on South Federal. “Turnin’ wrenches” or “Being a parts guy” were his career paths. He was known as the “go-to-guy” when someone needed help, always willing to give the shirt off his back for nothing in return. He loved golfing, shooting pool, and working on cars. Most of all he loved his wife and children so much that he did everything possible to care for them, even if it meant longer hours away from them.

Bryan spent the winter months shooting pool for the Charles City 8 Ball Pool League, and the Rookies in-house pool league. Spring to fall he would spend his free evenings “chasing that little white ball” at Highland Park Golf Course. He worked hard, and loved harder, all while remaining humble and selfless. Bryan continued his giving as ocular and tissue donor through the Iowa Donor Network.

He was preceded in death by his brother Charles Brandau, maternal and paternal grandparents, his step brother Ryan Uker, as well as other extended family members.

To send flowers to the family in memory of Bryan Brandau, please visit our flower store.