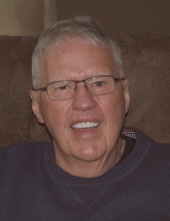 Visitation will be held one half hour prior to the service.

Bruce K. Mulkey was born in Denver, Colorado on September 28, 1939 to Clarence W. Mulkey and Effie E. (McBride) Mulkey. In 1944, Effie married Frank W. Bieser and the family grew with three older step siblings. They moved to Craig, Colorado where Bruce attended Moffat County schools and was very active in many school and community-related activities. As a child, he loved playing basketball, football, and wrestling. He collected marbles and liked shooting his 22-cal. rifle and pellet gun.

Bruce was married to Phyllis Deal in October 1957, and the couple lived in a student housing Quonset hut in Fort Collins, Colorado, where they both attended Colorado State University. Following graduation from college, Bruce embarked on a career in the Air Force and during those years, the family, now including three sons, lived in Hawaii, Virginia, Pennsylvania, and Nebraska. The marriage ended in 1978, but Bruce and Phyllis are fortunate to have maintained a friendly relationship over the years.

While in the Air Force, he worked at the top three locations for security of the United States which included Pacific Air Command in Oahu, Hawaii, Tactical Air Command in Langley, Virginia, and Strategic Air Command in Bellevue, Nebraska. He achieved the rank of Major and retired after 22 years of decorated service.

Bruce had hobbies of surfing the big waves of Waimea Bay at Oahu and has been hauling around his favorite surfboard for the past 50 years. He loved coaching semi-professional and Pop Warner football. He played golf and skeet shooting at championship levels. He enjoyed deep sea scuba diving in Hawaii and has the bone overgrowth in the ear canals to prove it. He enjoyed hunting ducks, geese, and pheasant in Nebraska and North Dakota. He was an Audi enthusiast and enjoyed driving the mountain roads in Colorado or the closed racetrack with his many cars. He loved investing in the stock market and analyzing the stock choices. He was a successful professional gambler and studied horse racetrack management from the University of Arizona and had a realtor license in Arizona.

One of the greatest life challenges for Bruce was overcoming his alcohol addiction and maintaining sobriety for 38 years.

One season of his life that was filled with love, spiritual growth, self-awareness, forgiveness, and selfless service was when he met Judith Chiri. He fell madly in love with Judi while at his 30th high school reunion in Craig, Colorado and quickly moved from Lincoln, Nebraska (where he had just moved the week before) to Denver, Colorado. They got married and developed a meaningful life together. Bruce and Judi moved to Mason City, Iowa in 2012 where they became members of the First Covenant Church. Bruce enjoyed participating in the men’s bible study and learning more about his Lord and Savior, Jesus Christ.

To send flowers to the family in memory of Bruce Kent Mulkey, please visit our flower store.