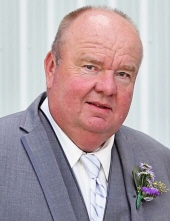 Services will be live streamed on the Major Erickson Funeral Home Facebook page.

Visitation will take place one hour prior to the service time on Friday, at St. James Lutheran Church.

Interment will be held in the Elmwood - St. Joseph Cemetery.

Memorials can be directed to the family of Bruce Nolte.

Bruce Alan Nolte was born on May 27, 1964, in Mason City to parents Carl and Dorothy (Harris). Bruce attended Mason City High School and after graduating he joined the workforce working various jobs. He was employed at AMPI for over 20 years before its closing, he then began working for Smithfield Foods. Bruce also owned multiple rental properties and helped his family launch and run several small businesses such as their limousine company, moving company, antique restoration, and food truck.

On November 25, 1989, Bruce was united in marriage to Shari Hefti in the First Lutheran Church in Algona. Between this union the couple had two children. Bruce had many joys in life. He was a member of the Mohawk Booster Club and an avid fan of the Iowa Hawkeyes. He was a man always looking for a deal collecting antiques and attending auctions. Bruce never missed an opportunity to attend an event or activity to support his kids. He loved spending time with his family, friends and grandchildren.

He was preceded in death by his father, Carl Nolte.

Those wishing to attend the visitation/service feel free to wear Iowa Hawkeye apparel or black and gold.

To send flowers to the family in memory of Bruce Alan Nolte, please visit our flower store.