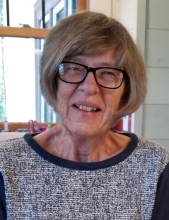 Bonnie M. Rawding, 73, of Mason City, passed away on Sunday, July 19, 2020 at her daughter’s home in Cedar Falls. A celebration of life will be scheduled at a later date. Memorials may be directed to the Mason City Public Library, Hawkeye Harvest Food Bank, or Cedar Valley Hospice.

Bonnie Mae Cline was born on September 26, 1946 to parents Harry and LaVerna (Leath) Cline. She graduated from Ventura High School in 1965. Bonnie went on to attend University of Northern Iowa, where she obtained her degree in Elementary Education. In 1970, she began teaching second grade at Madison Elementary. She also taught at Harding Elementary for many years until going back to UNI to obtain her Master’s Degree in Library Science and then became a Media Specialist. She retired from teaching in 2003.

In her free time, Bonnie enjoyed knitting, reading, attending performances at NIACC, drinking wine with her friends, traveling, playing in cards clubs, and spending time with her grandchildren. She was the Historical Librarian at First United Methodist Church for many years.

Bonnie was preceded in death by her parents and grandparents.

To send flowers to the family in memory of Bonnie M. Rawding, please visit our flower store.