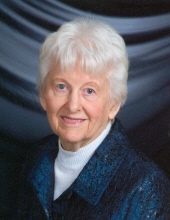 Bonnie Joy Bergman, 88, of Mason City, Iowa, died Monday, December 4, 2017, at the Muse Norris Hospice Inpatient Unit. Funeral services will be held at 1:00 p.m. on Thursday, December 7, 2017 at the First Covenant Church, 401 South Ohio Avenue with the Rev. Steve Johnson officiating. The interment will follow in the Oakwood Cemetery, Plymouth. Visitation will be held Wednesday, December 6, 2017 from 5:00 until 7:00 p.m. at Major Erickson Funeral Home, 111 N. Pennsylvania Avenue. In lieu of flowers, she requested memorials to The NIACC Foundation or KCMR Christian Radio Station.

Bonnie Joy Bergman, the daughter of LuVern and Anna (Rasmussen) Snell was born on October 11, 1929 at Kansas City, Missouri. She graduated from Rock Falls High School in 1947. She later obtained her BA degree from Buena Vista University at the age of 63. She worked as a bank teller/ bookkeeper at Community State Bank in Rockwell, accounts receivable manager at Skarlis Olds Honda dealership in Mason City, and librarian at Mason City Public Library. She married Henry J. (Bud) Bergman on November 7, 1948 and they moved to a farm outside of Rockwell. She was a member of the NIACC Foundation board for 23 years, a member of the KCMR Christian radio station board, and was involved with many community groups. Church was an important part of her life and she enjoyed singing in the church choir, as well as, attending Bible study and volunteering at other church activities.

To send flowers to the family in memory of Bonnie Joy Bergman, please visit our flower store.