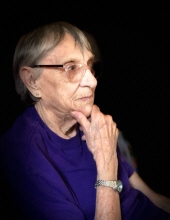 A funeral service will be held at 10:30 a.m. on Tuesday August 3, 2021, at Our Saviour’s Lutheran Church, 2502 S Jefferson Avenue with Pastor Matthew Muters officiating.

Visitation will be held from 9 to 10:30 a.m. on Tuesday at Our Saviour’s Lutheran Church.

Interment will be held in Memorial Park Cemetery. Memorials may be directed to the family of Beverly Thomas.

Beverly was born July 29, 1930 in Mason City, Iowa to Wayne and Bertha (Pederson) Niver. She attended Mason City Schools and graduated in 1949. Beverly was united in marriage to James L. Thomas on October 15, 1949 at the Little Brown Church in Nashua. They built their home and began the lifelong journey of raising their nine children, then two granddaughters who also became their own. Beverly devoted her life to James, all of her children, grandchildren, great grandchildren, all of their friends, and neighbors. During the years, she really enjoyed her cats, cooking, tending to the flower and vegetable gardens, and canning vegetables, and jelly. She was a member of the Master Gardeners, cared for many community flower beds, and leader of a 4-H club for many years. Everyone looked forward to “grandma’s potato salad”, begging her to make it often. In her later years she spent most of her time watching tv, taking crazy social media photos with grandkids, and entertaining with her wildest sense of humor. She was never shy at telling you “how it is” or when you were in the wrong but her home was always open to anyone and everyone who needed advice, a laugh, or just a place to be. She was especially close to great grandchildren Anna Jillian, Thane, Amara, Matthew, and Nalyssa along with their parents “Grandma and Grandpa’s Girls” who were always there to help her in every way and create beautiful memories.

To send flowers to the family in memory of Beverly R. Thomas, please visit our flower store.