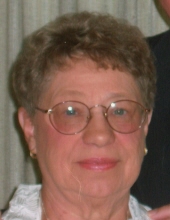 Visitation will be held one hour prior to the service time on Saturday.

Memorials can be made out to the family of Beverly Harris.

Beverly was a homemaker until her first granddaughter, Jennifer, was born. The plan was she would babysit her for a couple of months, but it didn't take long for Beverly to realize she was not going to relinquish that job to anyone else. Sam, Erin and Robby followed, and she babysat full-time for all of them. She called it the most rewarding job ever, but it was her grandchildren who benefited the most. Beverly was known by "Grandma Bev" to many of her grandkids' friends as well.

Beverly's grandchildren were the loves of her life. She never missed an event, no matter what the activity. Whether it was a cheerleading or sporting event, dance recital, school program or anything involving her grandchildren, Jenny, Sam, Erin and Robby knew Grandma Bev would be there to support them and cheer them on.

Beverly and Merle had many wonderful friends over the years through camping, bowling, and playing cards. She met friends often during the week to go out for dinner and play cards or for coffee at the Village. Beverly loved to read and watch Hallmark movies.

Beverly was preceded in death by her husband. Merle, and grandson, Robby, as well as her parents, two brothers, Frank and Larry Cawley, and several brothers-in-law and sisters-in-law.

To send flowers to the family in memory of Beverly Ann Harris, please visit our flower store.