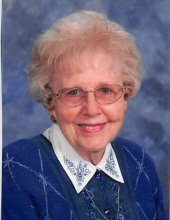 Interment will be held in the Clear Lake Cemetery.

Betty Lou Schneider was born on March 24, 1928, to parents George and Christine (Speidel) Groess in Brookfield, Illinois. Betty Lou graduated from Brookfield Riverside High School. She later attended Business College in the Chicago area. She worked for several companies as an administrative assistant, and later working for Schneider Metal.

On February 23, 1957, Betty Lou was united into marriage to Louis Schneider, Sr., and on that day, she became the mother of his four children. In the mid 70’s the family business moved from Chicago to Mason City and a few years later Louis and Betty Lou made the move to Mason City. Betty Lou and Louis spent many years enjoying retirement in California.

Betty Lou was very active in church work both in Chicago and at Trinity Lutheran Church in Mason City. Betty Lou loved gardening, planning events for her grandchildren, and traveling. She was an excellent caregiver throughout her life and Betty Lou will be dearly missed by those who knew her and loved her.

To send flowers to the family in memory of Betty Lou Schneider, please visit our flower store.